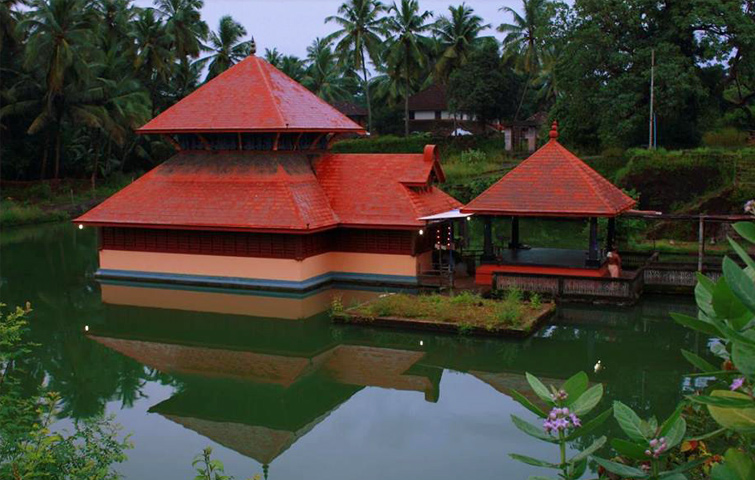 This 10th century old temple is located on the banks of the Madhuvahini River in Kasaragod, Kerala. Known for its architectural beauty and historic structure, this beautiful temple was built by the Mypadi Rajas of Kumbla.

It is believed that the temple has an idol of Lord Ganesha, which is not made of stone or soil but of a different material. The presiding deity of this temple is Lord Shiva, however, the uniqueness of the idol of Lord Ganesha, makes this temple popular among tourists. Some people also believe that once Tipu Sultan visited the temple with an intend to destroy it, but something changed his mind and he left it the way it is now.

The temple has a pond, which is believed to possess medicinal and curative properties that can heal anyone with skin illness or other rare disease. Moodappa Seva is a special festival celebrated here,in which, the statue of Lord Ganapati is covered with a mixture of sweet rice and ghee called Moodappam.

Madhur temple was originally Madhanentheswara (Shiva) Temple and as the lore goes, an old so called "low caste" lady "Madaru" discovered an "Udbhava Murthy" (a statue that was not made by a human) of shiva linga.

The Ganapathy statue was drawn by a priest's son, a small Brahmin boy, on the walls of the Garbhagriha (sanctum sanctorum) while playing. Day by day it became big and fat; so that the boy called Ganapathi as "boddajja"or "bodda ganesha". The legend of Kumble seme says Tipu Sultan wanted to demolish the temple like Adooru Mahalingeswara temple during his invasion of Coorg, Tulunadu, and Malabar. But after drinking water from the well of the temple, he changed his mind on attacking and demolishing the Garbhagudi and marched towards Malabar. But to satisfy his soldiers and Islamic scholars he made a cut with his sword symbolising the attack. The mark is still visible on the building that is built around the temple well.

The temple architecture is of 3-tiered gajaprishta type resembling the back of an elephant. One can also find beautiful wooden carvings depicting scenes from the Ramayana.The vast spacious gopurams give good ambiance for the devotees to relax and enjoy the Ganapathi's presence.