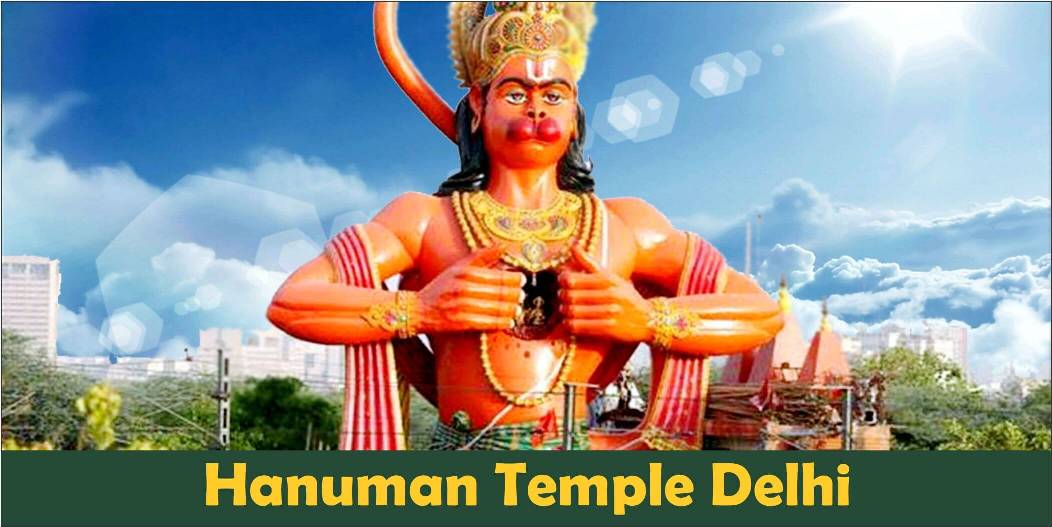 Hanuman temple at Connaught Place of Delhi is one of the five temples of Mahabharata days in Delhi. The temple has a self manifest idol of Lord Hanuman and worshipped as Shree Hanuman Ji Maharaj.

The temple, which has a self manifest idol of Hanuman,has an unusual feature fixed in the spire (Vimana) in the form of a crescent moon (an Islamic symbol) instead of the Hindu symbol of Aum or Sun that is commonly seen in most Hindu temples.

This became particularly important during the Mughal period corroborating this extraordinary depiction.

Entry to the temple is through the Baba Kharak Singh Marg (Road). The approach is through a set of marble steps from the road level leading into the main foyer of the temple through massive silver-plated doors, which are engraved with scenes of the epic Ramayana story.

The temple is situated on the Baba Kharak Singh Road (old Irwin Road) about 250 m (820.2 ft) southwest of Connaught place in Central Delhi, which is the commercial hub of Delhi. Tuesday and Saturday are special days of worship when devotees congregate at the temple in large numbers. Hanuman Jayanti (birthday celebrations of lord Hanuman) is held every year with great fanfare on the full moon (Purnima) day in the month of Chaitra (March – April) as per established lunar Hindu Panchangam or Hindu calendar.

As the idol of Hanuman faces the southern direction, devotees can discern only one eye of the idol. The idol depicts a Gada (mace or club) in the left hand with the right hand crossed across the chest showing veneration to the adjacent idol of lord Rama, Lakshmana and Sita. A tapering crown adorns the idol, which has a sacred thread on the right shoulder and is clad in a fashioned dhoti. The height of the temple is reported to be 108 ft (32.9 m).