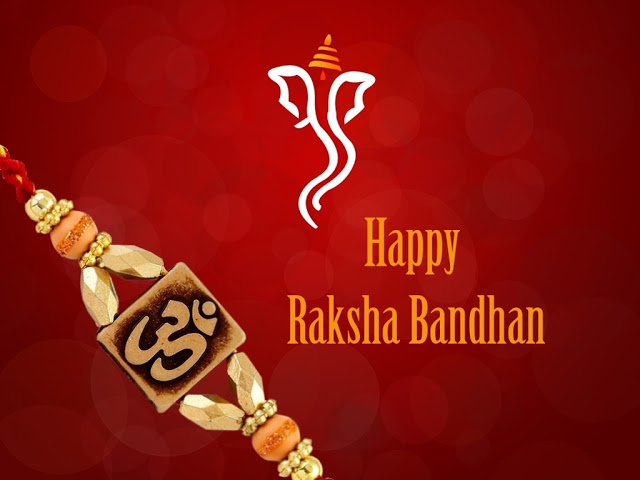 Raksha Bandhan is a popular festival celebrated across the country. Irrespective of caste and creed people from all walks of life participate in this festival. It is celebrated on the full moon day of the lunar month Shravana (Shravana Poornima) which also coincides with Upa-karma (changing the sacred thread for the brahmins, Avani Avittom in South India).

The festival is also called as Rakhi Poornima, Nariyal Poornima and Kajari Poornima in different states and is celebrated differently.

In Hindu religious functions we observe the preist tying a thread to the wrist of person/s performing the ritual before its commencement. It is believed and said that even Yagnopaveetam (sacred thread across the chest) acts as a Raksha (protection) to the wearer if one maintains its sanctity.

In the concept of Marriage, Mangala Sutra (tied around the neck of the bride) and Kankana Bandhana (a thread tied to the wrist of the bride and groom by each other) also has a similar inner significance.

The tying of a Rakhi is not confined to a brother and sister. It could also be tied by a wife to her husband, or by a disciple to the Guru. This bond does not have to be between blood relatives – a girl might adopt a boy as her brother through the tying of a Rakhi. This ritual not only strengthens the bond of love, but also transcends the boundaries of the family. When a Rakhi is tied on the wrists of close friends and neighbors, it underscores the need for a harmonious social life. This helps to broaden ones’ vision beyond the borders of ones own family to the entire earth (vasudha) as one family – Vasudhaiva kutumbakam.

According to Indian religous lore, Lord Siva is considered as the Father and Goddess Parvati as the Mother. The devotees of the Lord are my relatives, and I belong to all the three worlds.

How to celebrate Raksha Bandhan?

On the occasion of this festival sisters generally apply tilak to the forehead of their brothers, tie the sacred thread called Rakhi to the wrist of their brothers and do arati and pray for their good health & long life. This thread, which represents love and sublime sentiments, is called the ‘Raksha Bandhan’ means ‘a bond of protection’. The brother in return offers a gift to his sister and vows to look after her. Before tying a Rakhi on their brothers hand the sisters first tie a Rakhi on the Tulasi plant and the another Rakhi on the peepal tree asking for the protection of nature – Vriksha Raksha Bandhan.

Indra – Sachi Devi : As per Bhavishya Purana, Indra the King of Devas was advised by Deva Guru Brihaspati to wear a Rakhi as a protection against enemies (Demons) when he was facing defeat at the hands of Vritra Asura. Accordingly Sachi Devi (consort of Indra) tied a Rakhi to Indra.

According to one mythological allusion, Rakhi was intended to be the worship of the sea-god Varuna. Hence, offerings of coconut to Varuna, ceremonial bathing and fairs at waterfronts accompany this festival. Usually fishermen offer coconut and rakhi to the Sea God Varuna – this festival is known as Nariyal Poornima.

It is said that when Alexander was defeated at the hands of the great Hindu King Purushottam of Punjab, Alexander’s wife tied a Rakhi to Purushottam to protect her husband from being slain.

During the days of Emperor Humayun, it is believed that Rani Karnavati (Queen of Chittor) had sent a Rakhi to emperor Humayun in order to get protection from Bahadur Shah who was invading her kingdom. Inspite of being of a different religion, he rushed to her help.

The Message of Rakhi

Raksha Bandhan symbolizes the unmatched bond of love, care and respect. But in a broader perspective the festival of Rakhi (Raksha Bandhan) conveys an intrinsic message of universal brotherhood and sisterhood. Thus the festival of Rakhi conveys a message that has socio spiritual significance underscoring the need for nurturing of positive qualities, purity in thought, word and deed.