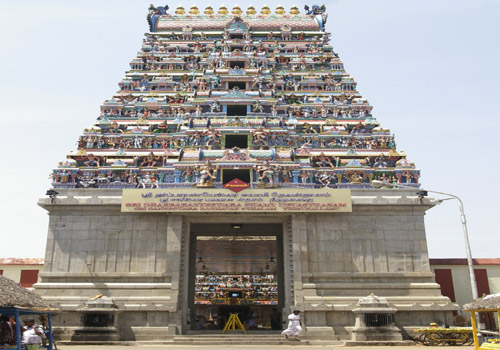 A Shani temple is built at Shani Kshetra, at Sangareddy, Medak district. Approximately 25 kms from Hyderabad, 7 Kms from outer ring road, 1 Km off Mumbai Highway, 2 Kms from IIT, Medak. A 13 foot plus Shani Idol will be installed as the main diety.

Shani Idol sthapana will be done on February 16th, 2013 at 10am. The word shani also denotes the seventh day or Saturday in most Indian languages. The word shani comes from Sanaye Kramati Sah,the one who moves slowly, because Saturn takes about 30 years to revolve around the Sun.

Shani is a deva and son of Surya and his wife Chhaya, hence also known as Chayyaputra. He is the elder brother of Yama, the Hindu god of death, who in some scriptures corresponds to the deliverance of justice. Interestingly, Surya's two sons Shani and Yama judge. Shani gives us the results of one's deeds through one's life through appropriate punishments and rewards; Yama grants the results of one's deeds after death.

Shani is one of the "Navagraha ” which are the nine primary celestial beings in Hindu astrology, or Jyotish. Shani is embodied in the planet Saturn. Shani is the Lord of Saturday; the word Shani also denotes the Seventh day or Saturday in most Indian languages.

The origin of word Shani comes from the following: Shanaye Kramati Sa: i.e. the one who moves slowly, as Saturn takes about 30 years to rotate around the Sun. Shani is also known as Shanaiscarya, Shani Bhagavan, Shaneesvara, Saneesvara, Shaneesvaran, Shani Deva.