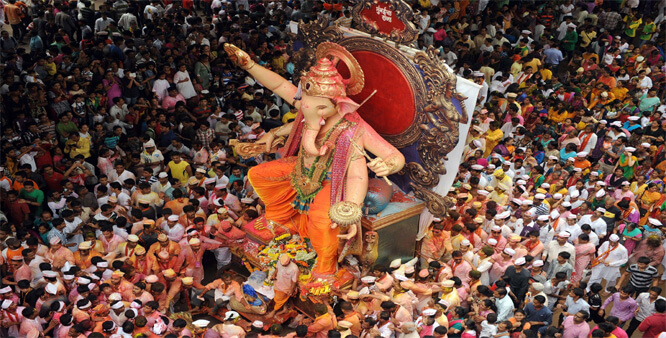 Ganesh Chaturthi, also known as Vinayaka Chaturthi (Vināyaka Chaturthī) is the Hindu festival that reveres god Ganesha. A ten-day festival, it starts on the fourth day of Hindu luni-solar calendar month Bhadrapada, which typically falls in Gregorian months of August or September. The festival is marked with installation of Ganesha clay idols privately in homes, or publicly on elaborate pandals (temporary stage). Observations include chanting of Vedic hymns and Hindu texts such as Ganapati Upanishad, prayers and vrata (fasting). Offerings and prasada from the daily prayers, that is distributed from the pandal to the community, include sweets such as modaka believed to be a favorite of the elephant-headed deity.The festival ends on the tenth day after start, wherein the idol is carried in a public procession with music and group chanting, then immersed in nearby water body such as a river or ocean, thereafter the clay idol dissolves and Ganesha is believed to return to Mount Kailasha to Parvati and Shiva.

The festival celebrates him the god of good beginnings, prosperity and obstacle remover. It is observed throughout India, especially as a public event in the western states of India such as Maharashtra, Gujarat and Chhattisgarh,[1][5] usually as a private home festival in other states such Goa,Karnataka,Tamil Nadu, Telangana, Andhra Pradesh and Madhya Pradesh. At public venues, along with the reading of texts and group feasting, athletic and martial arts competitions are held. It is unclear when the festival started, it may have South Indian origins, but historical evidence suggests it became a major social and public event with sponsorship of Shivaji after Muslim-Hindu (Mughal-Maratha) wars, and again in the 19th century after public appeal by Indian freedom fighter Lokmanya Tilak,[8] who championed it as a means to circumvent the colonial British government ban on Hindu gatherings through its anti-public assembly legislation in 1892.

Ganesha Chaturthi is also observed in Nepal and by the Hindu diaspora elsewhere such as in the Trinidad, Suriname, Fiji, Mauritius, United States and Europe(such as in Tenerife, Spain).

The Ganesh Chaturthi festival is dedicated to Ganesha. The earliest mention of Ganapati is in the Rigveda.

The earliest mention of Ganapati, now considered equivalent to Ganesha or Vinayaka, is found in the Rigveda. It appears twice in the Rigveda, once in hymn 2.23.1, as well as in hymn 10.112.9. Both of these hymns imply a role of Ganapati as "the seer among the seers, abounding beyond measure in food presiding among the elders and being the lord of invocation", while the hymn in mandala 10 states that without Ganapati "nothing nearby or afar is performed without thee", according to Michael. However, it is uncertain that the Vedic term Ganapati which literally means "guardian of the multitudes", referred specifically to later era Ganesha, nor do the Vedic texts mention Ganesha Chaturthi.

Ganapati appears in post-Vedic texts such as the Grhya Sutras and thereafter ancient Sanskrit texts such as the Vajasaneyi Samhita, the Yajnavalkya Smriti and the Mahabharata mention Ganapati as Ganesvaras and Vinayakas. Ganesha appears in the medieval Puranas in the form of "god of success, obstacle remover". The Skanda Purana, Narada Purana and the Brahma Vaivarta Purana, in particular, profusely praise him. Beyond textual interpretations, archeological and epigraphical evidence suggest Ganesha had become popular, was revered before the 8th century CE and numerous images of him are traceable to 7th century or earlier. For example, carvings at Hindu, Buddhist and Jain temples such as at the Ellora Caves, dated between the 5th and 8th century show Ganesha reverentially seated with major Hindu goddesses (Shakti).

Although it is unknown when (or how) Ganesha Chaturthi was first observed, the festival has been publicly celebrated in Pune since the era of Shivaji (1630–1680, founder of the Maratha Empire). After the start of the British Raj, the Ganesha festival lost state patronage and became a private family celebration in Maharashtra until its revival by Indian freedom fighter and social reformer Lokmanya Tilak. The festival, along with processions, was already in vogue as a public and a private celebration in Mumbai (then called Bombay) in 1885, according to the eyewitness account by a visiting Italian Sanskrit professor Angelo de Gubernatis:

I followed with the greatest curiosity crowds who carried in procession an infinite number of idols of the god Ganesh. Each little quarter of the town, each family with its adherents, each little street corner I may almost say, organizes a procession of its own, and the poorest may be seen carrying on a simple plank their little idol or of papier mâché... A crowd, more or less numerous, accompanies the idol, clapping hands and raises cries of joy, while a little orchestra generally precedes the idol.

According to others such as Kaur, the festival became a public event later, in 1892 when Bhausaheb Laxman Javale ( also known as Bhau Rangari), installed the first sarvajanik (public) Ganesha idol in Pune. In 1893, the Indian freedom fighter Lokmanya Tilak praised the celebration of sarvajanik Ganesha utsav in his newspaper, Kesari, and dedicated his efforts to launch the annual domestic festival into a large, well-organised public event. Tilak recognized Ganesha's appeal as "the god for everybody", and according to Robert Brown, he chose Ganesha as the god that bridged "the gap between Brahmins and non-Brahmins", thereby building a grassroots unity across them to oppose British colonial rule.

Other scholars state that the British Empire, after 1870 out of fear of seditious assemblies, had passed a series of ordinances that banned public assembly for social and political purposes of more than 20 people in British India, but exempted religious assembly for Friday mosque prayers under pressure from the Indian Muslim community. Tilak believed that this effectively blocked the public assembly of Hindus whose religion did not mandate daily prayers or weekly gatherings, and he leveraged this religious exemption to make Ganesh Chaturthi to circumvent the British colonial law on large public assembly. He was the first to install large public images of Ganesha in pavilions in Bombay Presidency, and other celebratory events at the festival.