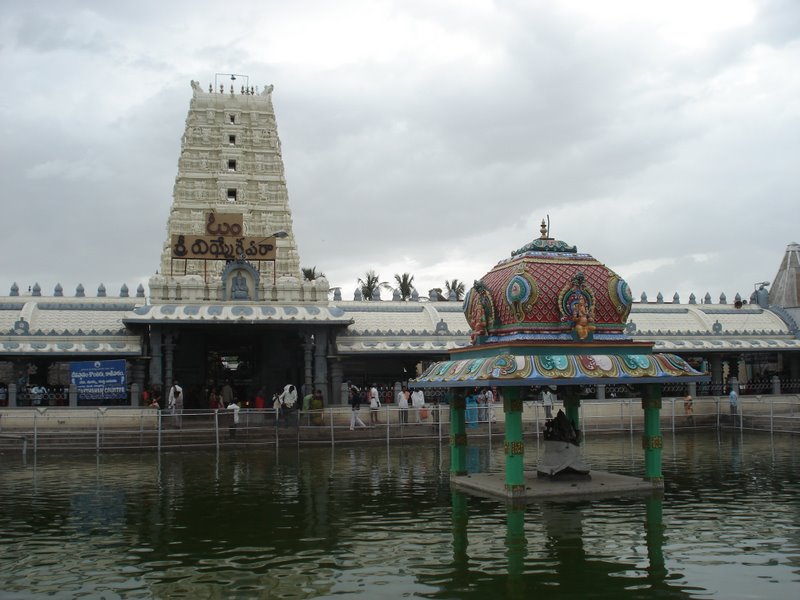 "Kani" means wetland and "Pakam" means flow of water into wetland. According to the legend of the temple there were three brothers and each one had a handicap. Viz., Dumb, Deaf and Blind. They were earning out their livelihood by cultivating a small piece of land.

In olden days water was drawn from the well by way of 'Piccota System'. As one of them used to irrigate the field through the channels, the other two used to ply on the Piccota. On one such operation they found that the water in the well got dried up and they could no longer continue their job. One of them got into the well and started digging it up. He was taken aback to see the iron implement hitting a stone like formation.

Later, he was shocked to see blood oozing out from it. Within in a few seconds the entire water in the well, turned blood red in colour. Thus, startled by this divine sight, all the three became normal getting rid of their deformities.

As soon as the villagers came to know about this miracle, they thronged to the well and tried to deepen the well further. But their attempt proved futile because the 'swayambhu' idol (the self-manifested) of Lord Vinayaka emerged from the swirling waters.

The coconuts water flowed into the channel to a distance of more than one and a quarter acres. The indication of this led to the modification in the usage of the Tamil word “KANIPARAKAM” and later pronounced as KANIPAKAM.

Even today the idol is in the original well and the springs of the well are perennial and the eternal. During the rainy season, the holy water from the well overflows even today.

Another striking and strange feature of the idol is that it is still growing in size.

At present, we can see the knees and the abdomen of the idol. Smt. Lakshmamma, an ardent devotee had offered a 'Kavacham' (Armour) to the Lord, fifty years ago but today it is out of size and doesn't fit the idol.

The holy water from the well is offered to the devotees as theertham.

The temple was constructed in the early 11th century CE by the Chola king Kulothunga Chola I and was expanded further in 1336 by the Emperors of Vijayanagara dynasty.