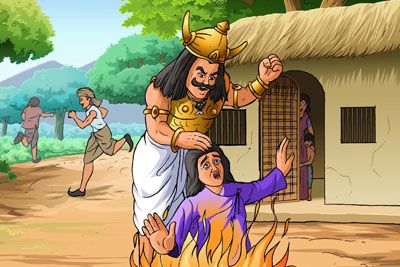 Bhasmasura was an asura, who was driven by ambition to be the most powerful Asura ever. He saw the other Asuras and decided that he would perform severe penance to win the favour of Lord Shiva and become powerful.

Lord Shiva never differentiated between his devotees, whether they were Devas or Asuras. If they were true devotees he appeared before them, no matter who they were. Lord Shiva satisfied with Bhasmasura's penance prayed to him with utmost devotion and appeared before him.

‘Open your eyes, Bhamasura!’ Lord Shiva said appearing before him.

Bhasmasura opened his eyes feeling the divine voice flow through him. He opened his eyes and saw the beautiful three-eyed God before him. He bowed low and fell on his feet. ‘My Lord, you have come at last…’ He said looking at Lord Shiva once more.

Lord Shiva smiled, ‘You prayed to me…I came to see you… What do you wish for, Bhasmasura?’

Bhasmasura smiled, ‘My Lord! I wish to be immortal...'

Lord Shiva shook his head, 'No Bhasmasura. That is against the laws of nature. All of whom are born have to die...'

Bhasmasura pouted. He had so wished that Lord Shiva would make him invincible and immortal. Looking at Lord Shiva, Bhasmasura realized that no amount of pleading would change Lord Shiva's mind. 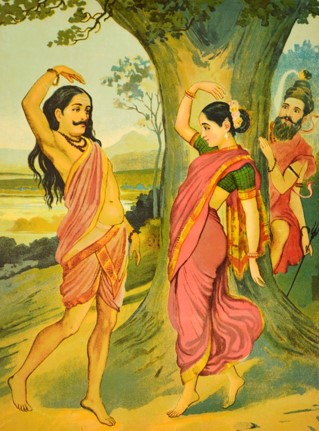 What should I ask...I need to become powerful...more powerful than...Bhasmasura looked at Lord Shiva as he had an idea...

'My Lord if I touch anybody’s head, they should be reduced to ashes…’ Bhasmasura said rather fast.

Lord Shiva frowned and wondered what prompted the Asura to ask such a wish. But then Lord Shiva remembered that Bhasmasura had prayed well and that he was duty bound to grant any boon that he sought for. So Lord Shiva raised his hand and granted Bhasmasura the blessing.

Lord Shiva winced when he heard this. He stared as Bhasmasura continued. ‘Now Lord! I wish to test my power. I…’ Bhasmasura said coming forward, ‘I will place my hand on your head….’

Lord Shiva backed away as Bhasmasura came forward….Lord Shiva realized that he could not take back his words. He would be reduced to ashes if he let Bhasmasura touch him. That would change the entire destiny...That was not the way the things must happen...So Lord Shiva did the only thing he could do...He ran and ran and ran, Bhasmasura followed him with his hands outstretched.

Lord Shiva was wondering what to do, when he prayed to Lord Vishnu the Preserver God. ‘Narayana, Please help me now….’ He said as he ran between a clump of trees inside a jungle…

Bhasmasura was about to follow Shiva inside the clump of trees, when he…stopped..

Before him stood the most beautiful woman he had ever seen. She was so beautiful and so graceful that for a minute Bhasmasura even forgot who he was…He blinked and stared at the woman again, ‘Wh…Who are you?’ He finally managed to say.

The lady opened her mouth and frowned looking at him, 'You don't come to someone's home and ask them who they are...You have to tell me who you are...'

Bhasmasura was having difficulty breathing. Slowly he inhaled and realized that the woman had asked him a question...'Bhasmasura...I ...I am Bhasmasura...' He croaked.

'Ok Bhasmasura,' The woman said looking at him with twinkling eyes. 'Now is the time you ask me my name...'

Bhasmasura felt silly as he spoke again, 'Who are you beautiful lady?'

'I am Mohini...' The lady said in a beautiful voice, which captivated Bhasmasura.

'Will you marry me?' Bhasmasura asked the words before he could stop himself.

Mohini gave a tinkling laugh and turned and walked away.

Feeling like an utter fool Bhasmasura also followed her. He followed her and slowly asked her everything about herself.

Mohini lived in the forest with her parents. She had come here to collect flowers for the daily puja at home.

'Mohini, what I meant back there was...' Bhasmasura said slowly, wondering whether Mohini would laugh at him again, 'will you marry me..I will take good care of you and keep you happy always.'

Mohini looked unhappy as she looked at Bhasmasura, 'You with your good looks...I would look to marry you..' Bhasmasura felt his heart swell. A woman like Mohini had called him a good looking man....But then why was she unhappy. Mohini continued, 'I am a dancer Bhasmasura. When I was younger I made a promise that I would only marry a man who can dance as well as me...'

Bhasmasura blinked. He had never danced in his whole life. But he promised himself. He would learn how to dance just to marry this woman...

Mohini looked at him and said anxiously, 'Don't worry I will teach you..If you follow my steps exactly the way I do it, I am...I am yours and I will marry you..' She said looking at Bhasmasura. Bhasmasura was ready to slay dragons for her.

So the two of them danced. Bhasmasura tried his best to copy Mohini's move as she smiled encouragingly at him.

They went on dancing, where Bhasmasura got better and better at copying Mohini's moves. Bhasmasura concentrated on dancing and on nothing else. Mohini soon had a move where she kept her hand on her head. Without thinking Bhasmasura did the same!

Unfortunately for Bhasmasura, his powers worked....

Mohini was looking at Bhasmasura's ashes as Lord Shiva appeared before Mohini. 'Thank you!'

'Anytime! Just think carefully next time, you grant anybody any boon.' Mohini laughed as she vanished and Lord Vishnu stood in her place. 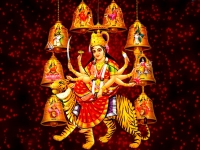