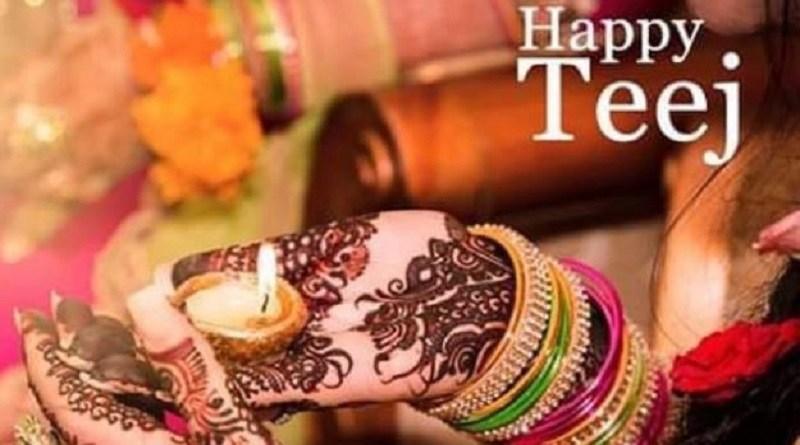 India is a nation that boasts of numerous colourful festivals celebrated with much grandeur. There are some festivals that are prevalent among women, such as Teej, which is celebrated with much fervour in the states of Rajasthan, Jharkhand, Bihar, Uttar Pradesh, Madhya Pradesh, Chhattisgarh and Maharashtra. Hartalika Teej is the most important Teej festival out of the three including Hariyali Teej and Kajari Teej. It is observed on the third day of Shukla Paksha (fortnight) in the Hindu month of Bhadrapad. This year, Hartalika Teej is observed today, that is 24th August, 2017. This festival is dedicated to Maa Hartalika, who is also known as Goddess Parvati. Hartalika Teej is celebrated to commemorate the day when Lord Shiva accepted Goddess Parvati's love towards him. Women all across the country, married or unmarried celebrate this festival in order to be loved by their counterparts or get loving spouses.

There are three types of Teej festivals celebrated during the monsoon months.

The first is the Hariyali Teej, also known as Chhoti Teej or Shravana Teej, which falls on Shukla Paksha Tritiya--the third day of the bright fortnight of the Hindu monsoon month of Shravana. This is followed by Kajari Teej (Badi Teej), which comes after 15 days of Hariyali Teej. The third type of Teej, Haritalika Teej, comes one month after Hariyali Teej, which is observed during Shukla Paksha Tritiya, or the third day of the bright fortnight of the Hindu month of Bhadrapada. (Please note that Akha Teej does not belong to this category of festivals, as it is another name for Akshaya Tritiya or Gangaur Tritiya.)

Hartalika word is the combination of “Harat” and “Aalika” which means “abduction” and “female friend” respectively. The legend behind Hartalika Teej Puja was narrated by Lord Shiva to Goddess Parvati, reminding Mata Shakti about her incarnation as Shailputri at the home of King Himalayaraj. Teej is celebrated in honour of reunion of Lord Shiva and Mata Parvati. The reason why Hartalika Teej came into existence after Parvati asked a friend to kidnap her so that her father would not marry her to Lord Vishnu against her wish.

According to Hindu mythology, on the third day of the bright half of Bhadrapada, Goddess Parvati made a Shiva Lingam out of her hair and prayed. Seeing her dedication towards him, an impressed Lord Shiva gave his word to marry Goddess Parvati. After years post the immolation of Sati events, Goddess Parvati was united with Lord Shiva, and this time they married with her father’s blessing. Since then, the day is referred to as Haritalika Teej as Goddess Parvati’s female (aalika) friend had to abduct (harit) her in order for the Goddess to achieve her goal of marrying Lord Shiva. In the present day, married women make idols of Lord Shiva and Goddess Parvati with the sand and worshipped for marital bliss, while unmarried females pray to Shiv for an ideal husband just like him.