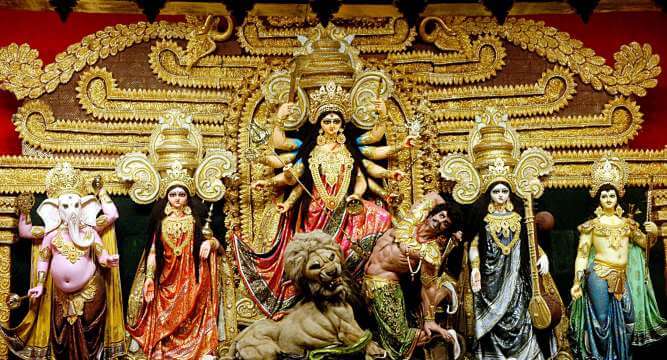 The Durga pujas of West Bengal (Kolkata) are annual festivities of a grand magnitude.

They are held over a five-day period. The city is adorned with festive lights, thousands of pandals are erected by communities all over the state, but particularly in Kolkatta.

People form organizing committees, who plan and oversee the pandal (temporary shrine and stage) for the festivities. For private domestic puja, families dedicate an area of their home for Durga Puja, they clean it and decorate it for small clay statue of Durga and other deities.

On the last day, that is Vijaya Dashami, devotes perform the Dhunuchi Dance. In this dance form, people hold earthen lamps which are called Dhunachi with coconut husks that are lighted inside them and dance.

The dance form is called the dhunuchi naachh and it is performed in front of Durga’s idol.

Married women smear each other with red vermillion powder that is popularly called the sindoor-khela in Bengal.

Then the idols are paraded around the city before they are finally submerged into a river.